The Rumbling: A Short Story by Jeff Bennington – Review 5 of 5 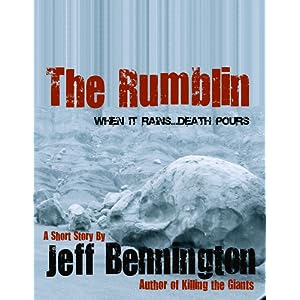 Book description: In this short story, Phil Knite is so ready for a vacation, but he and his family get more of mother nature than they can handle. The rumblin, as described by the Camp Ranger, is something to be feared. However, Phil blows the strange redneck-ranger off and heads to bed. Later that night, when a wicked wind blows in from the north, Phil is forced to shack up with the rest of the campers and learns that the Ranger is more than crazy, but he was right about the rumblin…it’s deadly!
This short-story is based on actual events! I took my family camping in the summer of 2010 and fully expected nice weather. However, when a dangerous storm blew in, we were ushered into a camp store cellar with the other vacationers. It was cramped and cold and my kids began asking about the other campers, wondering if they were safe. At that point, I couldn’t resist, the story teller in me weaved the terrifying tale of the rumblin’.

My Review: The Rumbling is insanely entertaining, fast paced, engrossing, detailed and disturbing. It reminds me why I am not a fan of camping.  Jeff Bennington knows how to write short stories. I totally loved it & I highly recommend it, great read for Halloween. For more short stories like this check Short & Sweet – List of Great Reads.