He’s waiting for you…

Under a blanket of snow, surrounded by dark woods and a frozen sea, lies an ogre’s castle. There lives a little princess, trapped in the maze of her own mind.
On a battlefield where the past meets the present stand a fairy godmother and a pirate, an old ice cream man and a knight in shining clean armor…
The clock is ticking fast, and to pierce the ogre’s secrets and defeat him, Island Chaptal will have to fight to remember…and stay alive.

Can the Lions and the Roomba cats be stopped before it’s too late?

I didn’t mean to, but I just dropped my glass again. It still happens—less than it used to. From time to time, my hands will shake uncontrollably, and whatever I’m holding will go crash, splatter, scatter on the floor, for Stiles to pick and clean up, as always.

As he carefully mops the purple mess of broken glass and grape juice on the tiling, he smiles that sweet, empty smile he always gives me. Faded, like his baby blue eyes. “It’s all right; we’re good. That marble has seen worse.”

I mumble another apology, gazing past him and through the bay window, at the ghostly silhouettes of the snow-covered pines surrounding the castle. You can’t see the Baltic Sea, but it’s there, beyond the trees, encircling the island. My father sent me here to rest because he says it’s quiet; it’ll help me find myself again. “An island for Island,” he said, and it made him chuckle. When I’m depressed though, which is more often than I like to admit, I just think my world has shrunk to a mile-long rock.

“Island, are you still with me?”

I look up at Stiles and nod automatically, but in truth, for a second I didn’t recognize him. I mean, I did, but it’s his voice or, rather, his accent. He told me once he was born in a place called Denton, in Georgia, where time trickled slowly and people squeezed their pennies so hard the eagle screamed. He said he spent sixteen years there, hunting quail, skipping church, and waiting for something to happen—according to him, the rest of the town is probably still waiting. All he kept from his hometown is a soft drawl that will occasionally weigh on his vowels. There’s nothing wrong with that, but every time he opens his mouth, it’s like my brain is expecting something more, someone else, until the feeling is gone, and I remember that it’s just Stiles.

I don’t know; it’s just one of the many things that are wrong with me. I guess I’m still pretty messed up since my accident. I feel slow, confused most of the time. Everybody tells me it’s normal, that eight months is not much to recover from the kind of trauma I went through, that maybe it’ll take years. I hope not. I turned twenty-six in September, and I’d rather not stay a convalescent child for the rest of my life.

Once he’s done wiping the last pinkish smear, Stiles wastes no time crossing the kitchen and opening the fridge to grab the bottle of juice again. He reminds me of a big robot: The man is cut like a Terminator, and he never gives up, never gets distracted. I drop the glass where he put my meds? He’ll fetch another one. I never tried, but I’m pretty sure that if I dropped it ten times, he’d fix it all over again ten times too. Always the same gray dress pants, white shirt, and black tie every day, always the same blond crew cut I suspect never grows. I could complain he also looks forty every day, but that’d be unfair: it’s not like I’ve known him for so long.

My heart skips a beat at the distressing thought. I have. I’ve known him almost all my life, since the day my father hired him to take care of me. Bodyguard, nanny, nurse . . . friend, maybe?

How could I know? I don’t remember any of that. 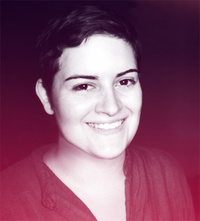 Camilla Monk is a French native who grew up in a Franco-American family. After finishing her studies, she taught English and French in Tokyo before returning to France to work in advertising. Today, she builds rickety websites for financial companies and lives in Montreal, where she keeps a close watch on the squirrels and complains on a daily basis about the egregious number of Tim Hortons.  Her writing credits include the English resumes and cover letters of a great many French friends, and some essays as well. She’s also the critically acclaimed author of a few passive-aggressive notes pasted in her building’s elevator.