Darker After Midnight: A Midnight Breed Novel by @Lara_Adrian – Review 5 of 5 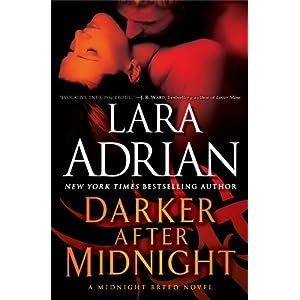 Book description: In the dark of night, a blood war escalates within the hidden world of the Breed. After existing in secret for many long centuries, maintaining a fragile peace with the humans who walk beside them unaware, a single act of retaliation has put the entire vampire nation at risk of discovery. It falls to the Order—a cadre of Breed warriors pledged to protect their own and humankind alike—to stop Dragos, the power-mad vampire at the center of the conflict, before his push for domination can explode into catastrophe. At the center of the Order’s quest is Sterling Chase, once a morally rigid enforcer of Breed law, now a warrior fallen from grace, whose biggest battle is the one he wages against his own savage nature. With addiction beckoning him toward eternal darkness, Chase’s path to redemption has never seemed more out of reach. But when his eyes meet those of Tavia Fairchild, a beautiful witness who identifies him at the scene of a mission gone terribly wrong, Chase finds himself drawn to the woman—and convinced she is something much more than she seems.

Pulled into a vortex of intrigue and danger she can neither resist nor understand, Tavia is uncertain whom to trust. And while everything sane and logical warns her against getting close to Chase, she cannot deny that the handsome, deeply haunted male stirs something primal and ravenous within her. But even as she surrenders to her cravings, nothing can prepare her for the shattering truth of who—and what—she truly is. As the Order’s enemy mobilizes for the battle of the ages, Dragos and his Minions unleashing a hell on Earth like nothing ever seen before, Chase and Tavia are thrust into the heart of the violence. With time running out and the streets running red with the blood of innocent lives, both Breed and human, together Chase and Tavia must find a way to defeat Dragos once and for all—or die trying.

Review: Darker after Midnight – is the story of Sterling Chase & Tavia Fairchild. Also, this is perhaps the most exciting installments of the Midnight Breed Series.  Anyone who has followed this series closely can agree that this is the most anticipated book of the series. I couldn’t wait to get my hands on it. When I was given the opportunity to read/review this book I was very excited.

This was a deliciously well written story, one that will leave you gasping, hyperventilating and asking for more. I had high expectations, and I am glad I was not disappointed. The story starts right where Deeper Thank Midnight ends, with Chase sacrifice by giving himself up to the human authorities.

As far as the characters: There is so much to say about them, Lara Adrian’s characters are often more than some of us can handle. Chase hasn’t been one of the favorites within the breed but he is however one of the most intriguing characters in the series.

His character is one we have come to love & hate and one that has been struggling for a long time. Sterling Chase’s character has a new set of struggles to overcome. His egotistic, self absolved and irreverent attitude is what has made me like him even more. In this installment, we get to see his struggles and how they bring him to the realization that some things are bigger than him. Mrs. Adrian not just creates a complex & dark character but also manages to make him intelligent, sensitive and very sexy.

Tavia Fairchild is smart, beautiful and different. She is brought into a world unknown to her, a world she had no idea would unveil into a harsh reality. Her character makes a big difference in the series; I think it actually shapes future in many ways. She is different & unique, and within her blood the race of the breed may find a new future. I like her character a lot; she is the perfect combination of sweetness, independence & personality. She isn’t the hardcore kickass heroine, but neither she is the needy or dependent type. Lara created Chase’s better half.

The Story: Darker after Midnight is an action packed, sexy and enticing story. Lara Adrian’s wild imagination and creativity is amazing. The story is fast pace, the characters are a sweet treat and the suspense is nerve wracking. The amount of action in this story is the perfect ingredient to create one of the kind story that compels you to read, to think and to dive head first into a world of passion, love, sacrifices & triumph.

The battle between the Order and Dragos is nonstop. There is a whole new level of obstacles in this story. If you think you have seen everything of Dragos plans think again. The twists and turns will keep you on edge and the new discoveries are gripping.

The story flows beautifully; there is not a moment when the characters or the plot feels forced or rushed. Lara Adrian has proven once again to be one of a kind.

This is a must read, one that will open your mind and imagination to what is coming next. The Midnight Breed Series is one you must add to your collection.