“Ah, so you also have an interest in Norse mythology?”

“Uh, yes.” It was better than admitting I had an interest in Chris Hemsworth and Tom Hiddleston. “Something like that.”

“Thor and Loki?” Joe asked. “You’re into the Marvel movies?”

“I’ve always been a comic book guy, but I did read the Poetic Edda a few years back.”

His chuckle became a full-blown laugh. “I knew it. So, Hemsworth or Hiddleston?”

Dammit, what the hell was an Edda? “Uh, Hemsworth,” I blurted before my mouth caught up with my brain. The blond. The blond who bore a disturbing similarity to Joe. 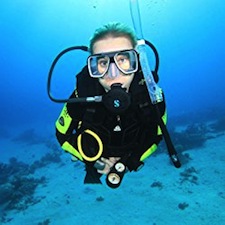 Elise Noble is an English rose with a few thorns who loves chocolate, sleep, and well-defined abs. Not hers, unfortunately. She lives near London with a sexy chef, a horse who eats all her money, and a dog who eats her car keys. Always a reader, she took up writing after inspiration struck in an old manor house, and still pinches herself at the fact that people read her books. She spends her days working in an office and her nights dreaming up new characters for you to fall in love with. Elise currently writes the Blackwood Security series of romantic thrillers and the Trouble series of romantic comedies.


Check It Out – Movie Review & Recommendation: The Handmaid’s Tale via HULU